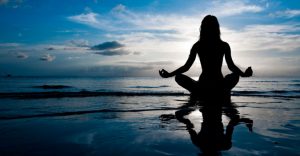 Zen masters are known for their tranquility and seem to possess a unique blend of relaxation and alertness.

Their monastic lifestyle, combined with decades of daily meditation undoubtedly explains much of how they have attained their calm, well-balanced mindset.

But there is another overlooked factor: they consume large quantities of green tea, and one of the main ingredients in green tea is L-Theanine.

L-Theanine is an amino acid that is present in the tea plant and some mushrooms.

The “L” is a scientific notation of its structure.

Its makeup is related to L-Tryptophan, which is another amino acid that is a precursor to the neurotransmitter serotonin.

Serotonin is a chemical manufactured by the body that controls mood balance and is sometimes referred to as the “feel-good” hormone.

When the serotonin in your brain is at a perfect level, you are creative, relaxed, focused, and have excellent impulse control, which is typical of the ideal Zen state of mind.

On the other hand, if your levels of serotonin are low you may feel depressed, act impulsively, have a short attention span, and have difficulty relaxing...the exact opposite of a Zen mindset.

Therefore, it is vital to maintaining a proper balance of serotonin, and L-Theanine works wonders in this regard. L-Theanine is responsible for the flavor of tea as well as the physical and mental effects that tea connoisseurs enjoy.

L-Theanine lowers stress levels and relaxes your brain by increasing alpha wave activity. These are the waves that happen when you're alert, awake, and relaxed. They also help you concentrate and boost creativity.

The beautiful thing about L-Theanine is this: it allows you to be alert and focus while at the same time remaining calm without becoming sleepy or tired.

L-Theanine was isolated from green tea as a flavor component by Japanese scientists in 1949. 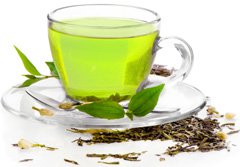 Several Japanese studies have demonstrated that oral intake of L-Theanine can produce a feeling of relaxation and improved sleep quality, as well as reduced stress responses during stressful situations.

Another Japanese study confirmed that L-theanine resulted in significant increases in serotonin and dopamine concentrations in the brain, particularly in the striatum, hypothalamus, and hippocampus.

The result? All of the “feel good” benefits mentioned above.

The at-times maddening pace of 21st-century life has many, if not most people constantly stressed out and with frayed nerves.

Medical professionals are quick to hand out anti-anxiety prescription drugs that may be effective, but may also come with serious side effects, not to mention the possibility of developing a dependence on them.

But instead of drugs, many folks find that tea is their favorite method of relaxing, due to tea's calming effect.

And, as mentioned earlier, the main ingredient in tea that produces that calming effect is L-Theanine.

This is a fascinating relationship and explains why supplementation with L-Theanine is so essential.

Many people entering the wild world of nootropics don't stop to consider the fact that caffeine is considered by many to be a smart drug.

Coffee gets us going in the morning, but when consumed in large doses it has a 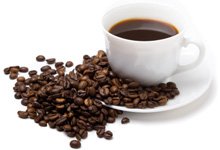 But here's the good news: L-Theanine eases these adverse side effects of caffeine. The ideal ratio for caffeine and L-Theanine is two parts L-Theanine to 1 part caffeine.

This is extremely difficult, if not impossible for most of us to accomplish with green tea alone.

Therefore, a good plan is to drink both coffee and green tea...and add L-Theanine to the mix.

Combined, they will give you a good mood, increased awareness, and a larger attention span.

But That's Not All of the Benefits that L-Theanine Delivers

In the ever-increasing fast-paced society that is 21st century America, stress is a gigantic problem and takes a terrible toll in many ways.

According to The American Institute of Stress, there are numerous emotional and physical disorders that have been linked to stress: depression, anxiety, heart attacks, stroke, hypertension, immune system disturbances that increase susceptibility to infections, a host of viral-related disorders ranging from the common cold and herpes to AIDS and certain cancers, as well as autoimmune diseases like rheumatoid arthritis and multiple sclerosis...what a parade of horrors!

Knowing this, it's easy to see that if the only benefit regular doses of L-Theanine did was reduce stress, it would be well worth your while to jump on it.

But it does more than reducing stress...far more. Here are some of the other health benefits of this fantastic amino acid:

What is the Correct Dose of L-Theanine? 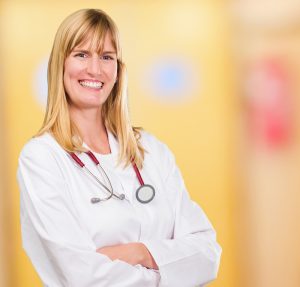 The good news is that L-Theanine is well-tolerated by the vast majority of users and has no adverse effect on driving abilities or other day-to-day activities.

Still, as with all nootropics, the results can vary, so as always, start slow and gauge your reactions.

So there you have it.

Granted, supplementing with L-Theanine will not turn you into a zen master overnight.

But it will deliver the benefits mentioned. Consider adding this safe, inexpensive supplement to your nootropics cabinet.